Say what you will about Square Enix, but it’s impossible to deny that they’ve got a knack for publishing offbeat experiences that few other major publishers would touch. Their latest oddity, ­the lengthily named The Centennial Case: A Shijima Story, is an ambitious interactive detective story framed almost entirely through full-motion video (or FMV) – a style of presentation that really thrived in the 90’s but is only now experiencing a small resurgence in popularity. Despite its niche presentation, the game delivers an intimate and intelligent mystery that is well worth seeing through to the end, if players can endure its slow pacing and only moderately interesting characters.

The story of The Centennial Case follows the exploits of Haruka Kagami, a plucky mystery writer with a famous series of detective novels under her belt working in modern-day Japan. During a book signing, she’s approached by a molecular scientist named Eiji Shijima, whose family has spent a long time researching how to stop cells from aging. A once-in-a-century ceremony to appoint a new head of household will be happening soon, he tells Haruka, but he believes the ceremony also has connections to a local legend: a mysterious Fruit of Youth called the Tokijiku that grants agelessness to whoever eats it. That’s enough on its own to get the writer’s attention, but on top of all that, a skeleton was recently discovered on the property that Eiji believes could be connected to a long string of murders that has plagued his family for decades. Sensing a mystery to be solved, Haruka accompanies him to his family’s estate at the base of Mount Fuji to observe the ceremony and try and connect the disparate pieces. 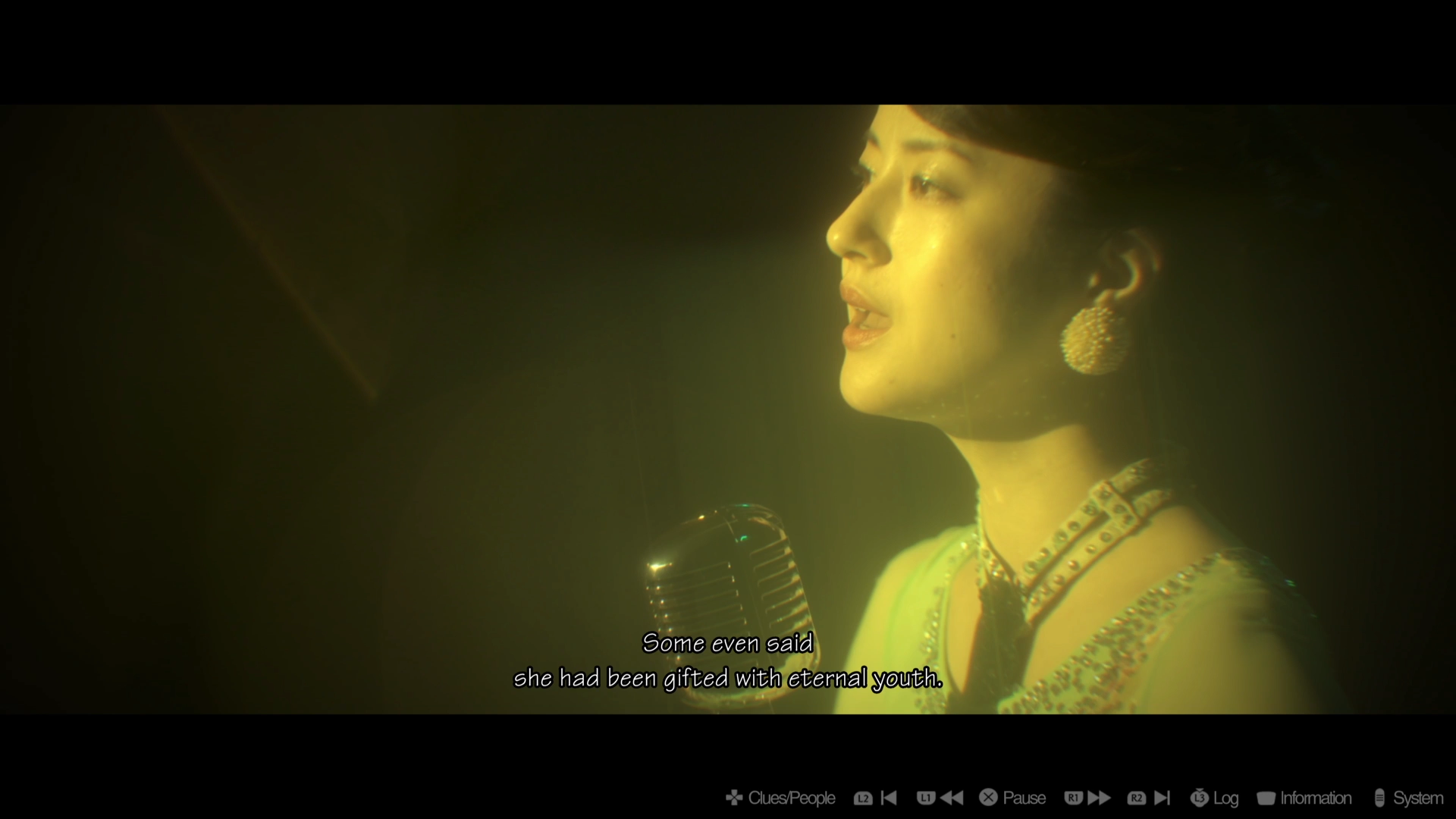 Of course, being an FMV game, the entire narrative is delivered by way of real, human actors on real-world sets. It’s here where you’ll watch Haruka interact with the residents of the Shijima household, search for clues and (inevitably for this genre of game), witness the occasional murder over the course of six substantial chapters. These are mostly passive experiences, and although you’ll occasionally be prompted to make a dialogue choice for Haruka, these are largely inconsequential as there is exactly one way to reach the ending of The Centennial Case. It’s after these segments, though, that the “game” part of The Centennial Case begins.

Once Haruka has collected enough clues, the player will be whisked away into the Cognitive Reasoning Space, which is basically a representation of her brain. Here, you’ll be responsible for physically connecting the correct clues with various mysteries to form different hypotheses about what could have happened. You do this by sifting through dozen of “clue tiles” and placing them on a hexagonal grid next to “mystery tiles” – each time you do, you’ll unlock a new theory that could be a crucial part of solving the mystery. It’s important to be thorough here, because when the time comes to point a finger at a suspect in whatever mystery the current chapter is centered on, you’ll rely on the conclusions you formed in the Cognitive Reasoning Space to back up your arguments. 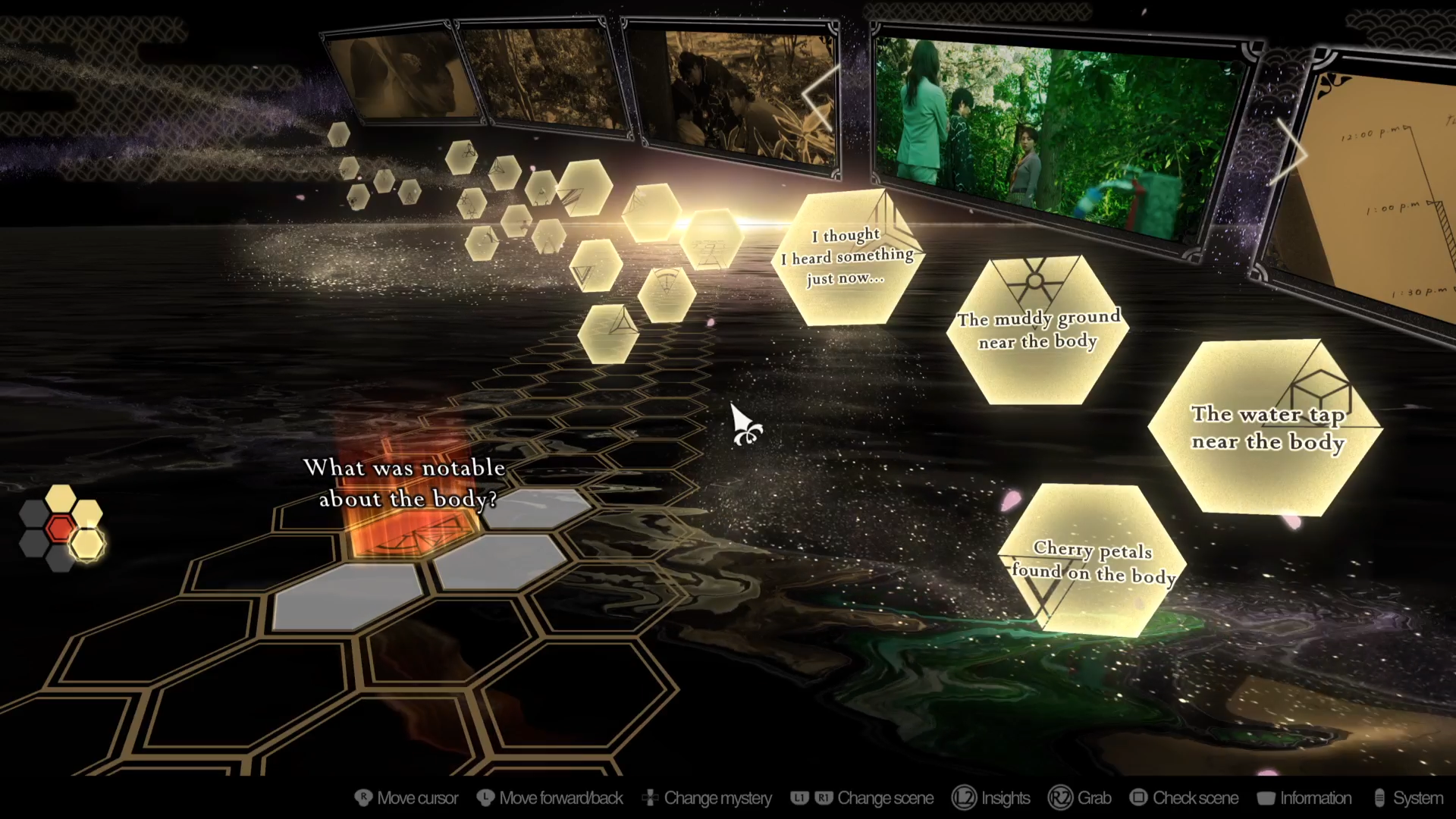 On one hand, this is all fairly straightforward – clue tiles are arranged in the chronological order in which they first appeared in the story, and you can even rewatch the FMV scenes that accompany them to try and make it easier to figure out where each clue tile might fit. Also, each of the clue tiles has a pattern on one side of it that matches with one of the edges of a mystery tile, so this can also make it easier to identify where the clue tiles and mystery tiles could connect. The downside to this system, though, is that there’s very little puzzle-solving in the Cognitive Reasoning Space and a lot of trial and error. Each clue tile has exactly one place on the board where it can go, and with so many of the clue tiles having similar names or descriptions, it can occasionally feel tedious and repetitive to place them all. You’re not likely to really ever get stuck, just bored – although there is a hint system here if you’re feeling impatient and want the game to help you place some tiles.

Once you’re done working with clues in the Cognitive Reasoning Space, the game will return you to whatever scene you were in before, and it will be up to you to not only identify the suspect, but support your accusation with cold, hard evidence. The Centennial Case does a great job making these sections feel important – make an incorrect accusation or an illogical claim even once, and a game-over scene will play that basically depicts the other characters in the game essentially calling you a dumbass and telling you why you’re wrong. From there, the game will boot you back to the Cognitive Reasoning Space so that you can review the hypotheses you formed earlier before trying again. I really found myself having to think hard to figure out what the solution to each mystery was, even though I felt like I had been paying attention – but every time I made a mistake, it was always because I had overlooked an important detail. It made it feel even more empowering when I did eventually nail a tricky interrogation sequence on my first try. 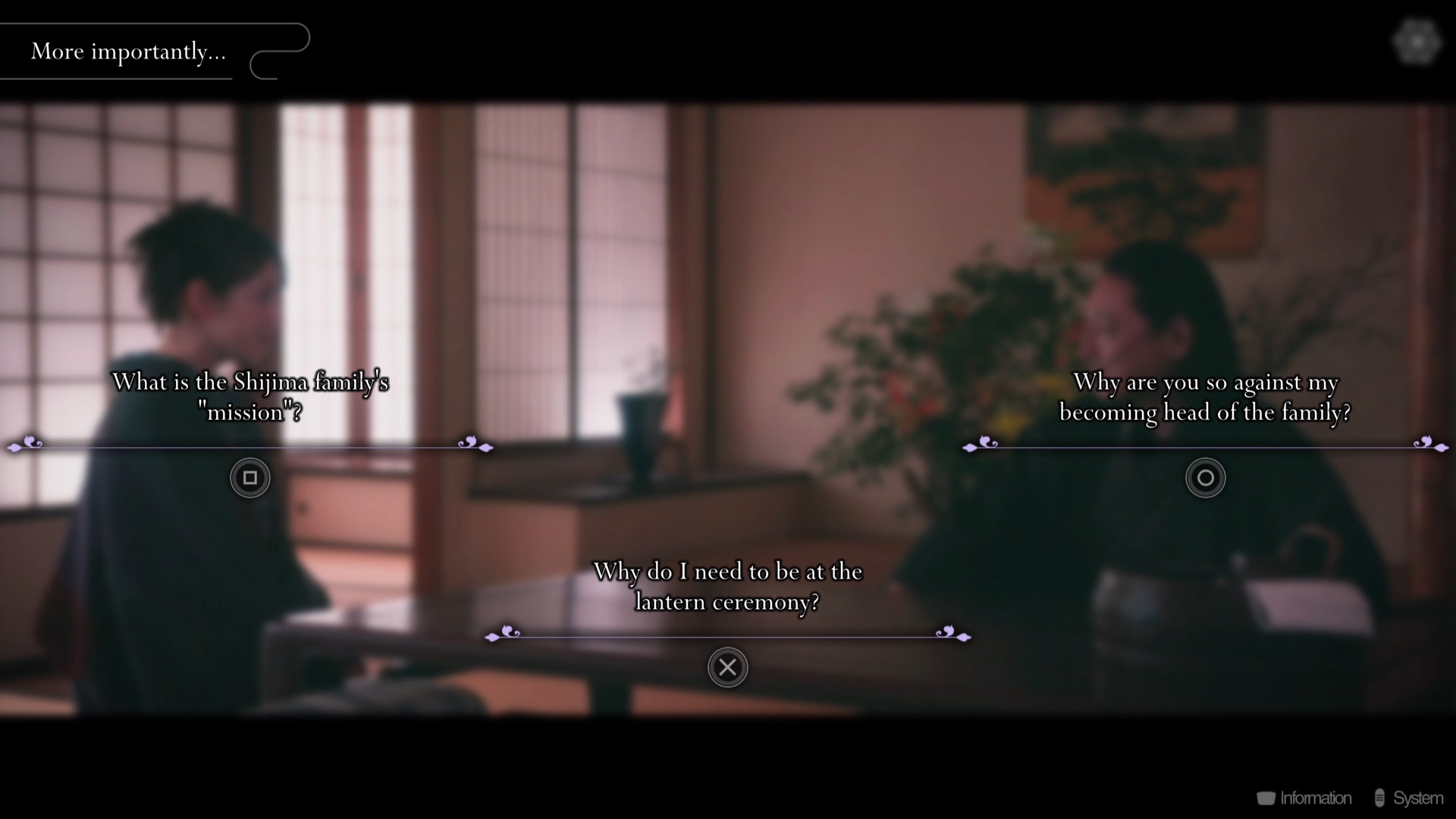 I will say, though, that towards the end of the game, there’s a pretty major new gameplay element introduced completely out of left field that I really did not enjoy. I’m not really supposed to talk about it in detail, but basically what happens is that the game takes a break from the “analyze clues and interrogate suspects” mechanic to a “solve an obtuse, large-scale puzzle for an hour and a half” type of deal. It fits within the context of the narrative, so it’s not necessarily an unreasonable addition to the game, but I found it far more frustrating than fun. It totally slammed the brakes on a story that, up that point, had just been getting better and better as it went on. I got through it to get to the ending of the game, and am glad I did, but it really sucked me out of the experience.

Other than that, I really enjoyed this gameplay loop as it was presented in The Centennial Case and didn’t find myself tiring of it even over the course of the game’s roughly 10-hour runtime. At first, I had a hard time getting interested in what was going on – the game introduces you to new characters very quickly and is so focused on setting up the facts of the overarching mystery that it allows itself basically no time to establish unique identities for its characters. This is a problem in any narrative-heavy game, but fortunately, The Centennial Case somewhat makes up for it by introducing a clever narrative gimmick early on. Early in the game, Haruka learns that the Shijima family has been plagued by a mysterious murder almost every ten years or so for almost a century, and so to help her figure out exactly what is going on in the modern day, she digs through some old books to try and uncover what has happened in the past as well. When this happens, the game jumps its narrative back in time for a chapter or so, and all the actors playing characters in the “present day” scenes suddenly take on new roles, playing younger versions of the modern-day characters, or sometimes different characters altogether. This is explained in game as Haruka project the personalities of people she knows in her life into her brain’s reimagining of what happened in the past, so that she can try and solve the mystery as she reads these historical records of the past. 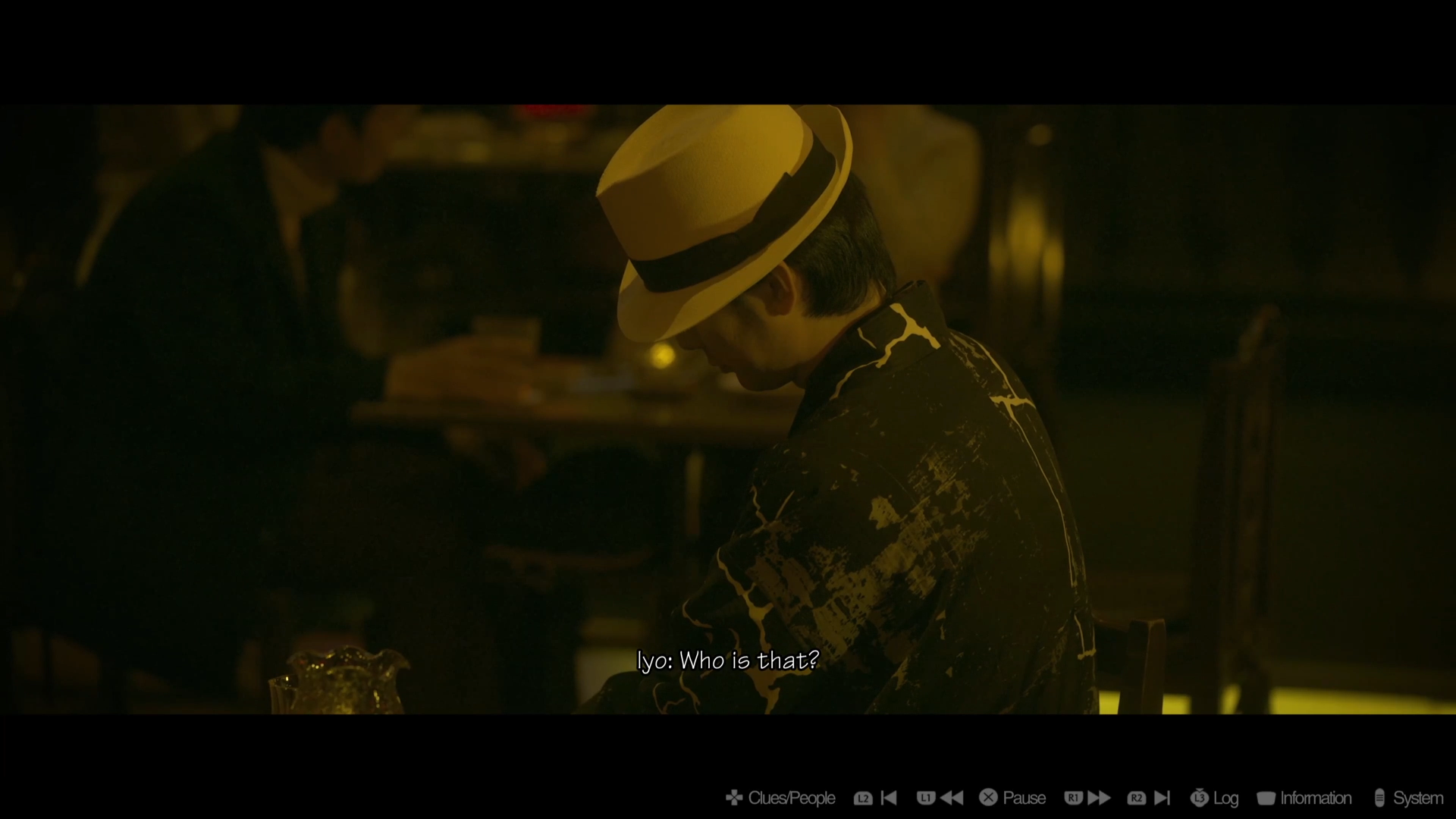 It is remarkably creative presentation, and to me it made The Centennial Case feel more akin to a stage play than a television show or movie. Suddenly, the slightly hokey writing and exaggerated acting began making more sense. The Centennial Case isn’t trying to be the next Agatha Christie story; it’s trying to be a murder mystery dinner theatre production, with a handful of actors changing costumes backstage between acts. Once I realized that, everything began clicking into place, and the tonal whiplash between the darkest moments of the game’s story and low-key comedy that plays out shortly after became so much easier to appreciate. Furthermore, the masterful way in which all The Centennial Case’s mysteries began to come together was like turning on a light switch in a dark room for me. This is a very smart, well-crafted narrative, but it keeps its cards close to its chest for a good while. Part of me wants to liken it to a Japanese take on something like the movie Knives Out, although I don’t think it succeeds at exactly that level.

Despite its faults, The Centennial Case feels poised more than any other recent FMV game to be the one to bring more people into the genre. It certainly accomplished that with me, someone who has never really enjoyed this type of game before. Is it niche? Absolutely. Will this be a game that develops a cult following over time thanks to its unique ideas? I’d put money on it. Should you give it a try? If you’re curious about the ways in which film and gaming can intersect, I can’t think of a better place to start.

The Centennial Case: A Shijima Story is a creative take on the traditional detective story that does a good job melding its live-action presentation with moderately satisfying gameplay; although sifting through clues loses its luster over time, presenting your theories and evidence is rewarding and challenging, and the mystery at the crux of the story just gets better and better as the game progresses. This is bolstered by some clever means of framing the game’s narrative that really helps set this game apart tonally from everything else out there. Come in with patience and an open mind, and The Centennial Case might just surprise you.

The Centennial Case: A Shijima Story copy provided by the publisher for the purposes of this review.

Ori and the Blind Forest was its developer's Mario, however its subsequent recreation … – Gamesradar