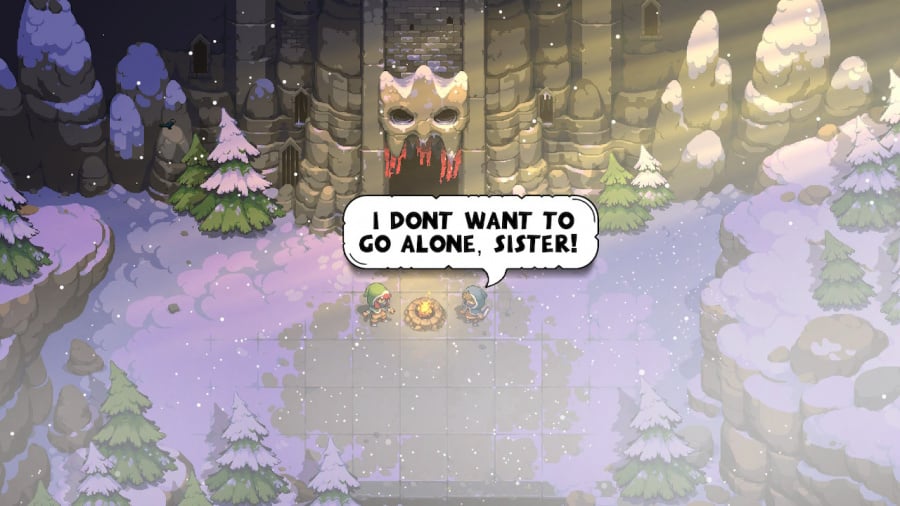 Dungeons of Dreadrock is a simple little game centering around the efforts of an adventurous girl to save her brother from sacrificing himself in a haunted dungeon. He’s been taken down a hundred floors crawling with goblins, spiders, traps, and other awful things, and you’ll need to overcome it all if you wish to save him. Narrative is kept to a minimum here, but brief vignettes that play out every few floors when you nap by a bonfire help to give you a sense of the world and why your brother felt the need to sacrifice himself.

Gameplay has been compared to a dungeon crawler, but this is really a puzzle game with swords ‘n’ sorcery set dressing. Every floor of the dungeon is laid out in a grid-like fashion, and the goal is to figure out how to reach the next set of stairs safely, often necessitating you game out precisely how to dispatch of any foes and avoid triggering obstacles along the way. In this way, it’s not the kind of thing where you’ll be testing your skills or dexterity much—the emphasis here is more on forming the plan than executing it.

As you descend deeper, Dungeons of Dreadrock continues to find new and creative ways of challenging players, such as the introduction of some puzzles that require a return trip to the last floor, or the addition of gimmicks like a teleportation system. No two floors are too similar and the puzzle design overall feels difficult, but manageable. It’s rare that you’ll know what to do right away, but after a few minutes of study and some failed attempts, you usually can tease out the answer.

The visuals takes strongly after the art style of The Legend of Zelda: The Minish Cap, characterized by cartoonish, but nicely detailed 32-bit sprites and environments. Everything that’s here looks nice enough, but we would’ve liked to have seen a little more variety in the environments and enemies, as going from one dank dungeon floor to another that looks no different gets tiring after a bit. Meanwhile, its music is interestingly light-touch, with most floors simply having ambient noise and the low sound of blowing wind to set the atmosphere.

Something that we feel merits mention is that you can currently download Dungeons of Dreadrock for free on smart devices; eliminating ads is a simple matter of a one-off purchase of $2.49. Paying four times that amount for the option of playing it with Joy-Con on your TV (we’re told that Pro Controller support is coming via an update) is a tough sell, and not something we would recommend unless you either don’t have a smart device or you absolutely insist upon playing this on Switch. It’s a fine game that plays well on the console, but there aren’t any exciting new features to justify a much higher price point beyond the familiar hey, it’s on Switch! factor.

Dungeons of Dreadrock is a well-designed puzzle game that cleverly builds on its formula throughout its brief run. Those of you looking for a good game to wind down with before bed may want to give this a look, though we would encourage investigating the smart device version if you’re happy to play on mobile.

Horgihugh and Friends takes to the skies on Nintendo Switch today

Ori and the Blind Forest was its developer's Mario, however its subsequent recreation … – Gamesradar