As a relative late-comer to the Evil Dead fandom, I had a short – but very intense – period of excitement prior to the release of Saber Interactive’s asymmetrical action-horror: Evil Dead The Game. It’s a game that I have been keen to try, though, after falling in love with Sam Raimi’s direction of the movie trilogy and the development of Ash William’s character from mild-mannered college kid to heroic demon-slaying badass. After spending the weekend with Ash, Henrietta, and more Deadites than you can shake a Boomstick at, I am pleased to share that this game does not disappoint.

Evil Dead The Game really is a treat for fans of the Evil Dead franchise – as well as being a treat for general fans of the horror genre or asymmetrical multiplayer games. It ticks all the boxes you’d expect from a game like this, and then ticks a few more that you didn’t know existed. Just from trawling through the game’s menus, it’s clear that this game was made by fans, for fans. However, it does a good job of explaining what’s going on for the casual audience too. It’s also one of the few asymmetrical multiplayer games that has full single-player support – in the form of the Evil Dead The Game missions list and AI-controlled survivors and demons.

But, of course, having AI companions is only part and parcel of what makes this a fantastic offering from Saber Interactive. Throughout my time with the game, I found it to be a rich experience that builds on the asymmetrical multiplayer genre – something that is dominated by a handful of games to date.

When I first jumped into the game, the first thing that struck me was just how good everything looked. I know I’m playing it on a next-gen console, so the graphics were never going to look that bad, but the game is a feast for the eyes beyond its detailed textures and smooth frame rates.

The in-game artwork is truly exceptional. Whether you’re trawling through the menus looking at the game’s impressive array of unlockable skills and upgrades, or deciding which mission to tackle next, you’ll find Ash Williams and his buddies beautifully illustrated. The artwork showcases the survivors using in-game items, battling Deadites, or facing off against a terrifying Kandarian Demon. 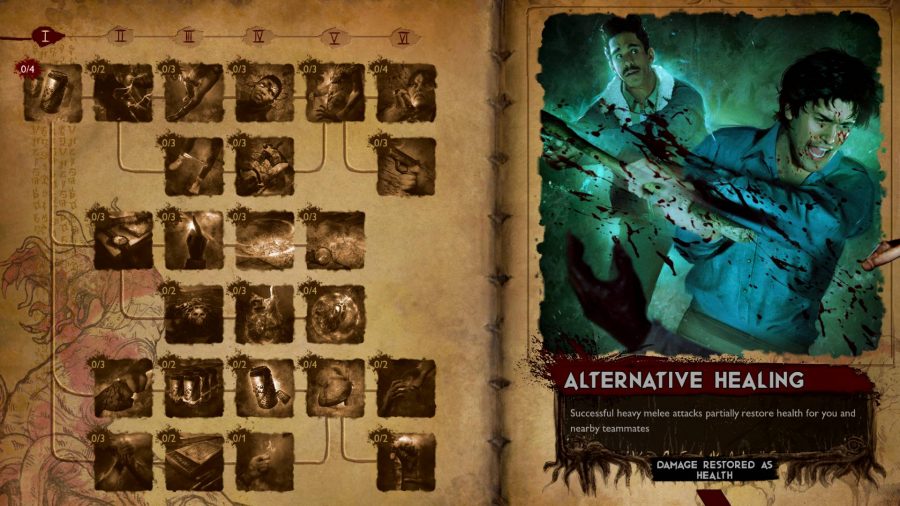 Then, when you come to actually playing Evil Dead The Game, you’re met with an intensely atmospheric action-horror experience that evokes the emotions brought about by Sam Raimi’s movies with unexpected accuracy. It’s overly graphic, in a campy way, with its intense blood-splattering finishing moves and shotgun blasts that quite-literally blow the face off of the Deadites you’re up against. And, more importantly, it’s isolating, despite the fact that you’re playing within a team of four, with its sparsely-lit open spaces and impressive weather effects.

This feeling of isolation is only intensified by the absence of enemies from the game’s minimap and the Fear system.

When you’re running around in the darkness as Ash – or one of his buddies – you need to keep an eye on your Fear level. This increases whenever you’re alone, under attack, or in the darkness – adding an important survival game-like aspect to this already action-packed experience. There are ways for you to reduce this level, mainly by standing in the light and taking a breather, but Evil Dead The Game doesn’t make that easy. 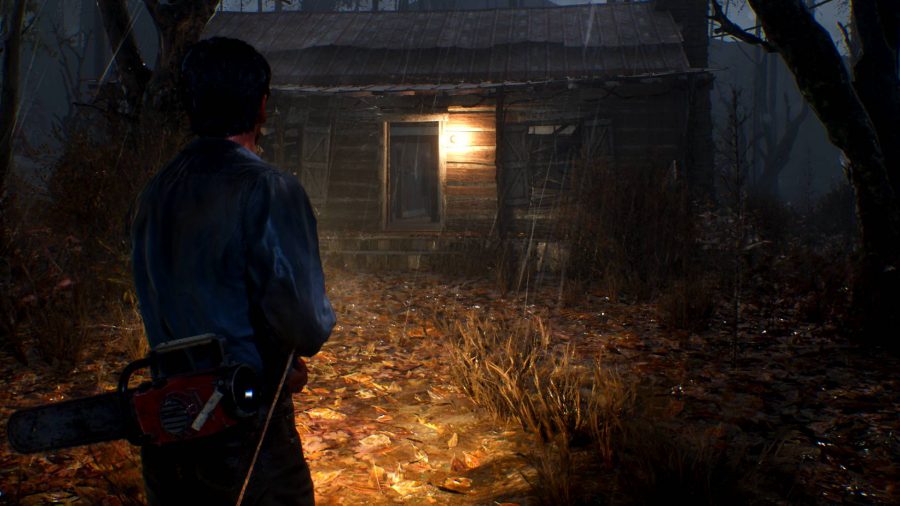 So, it ultimately feels inevitable that you’ll max out your Fear level at some point during a game – sometimes, you just can’t find the matchsticks you need to start a campfire.

the thrill of the chase is arguably the best part

When that does happen, you know you’re in for a bad time. But while it’s terrible – and downright terrifying – it’s also one of the most exhilarating experiences for a survivor. When your survivor is scared, you get tunnel vision. Your in-game sound and the edge of your screen become distorted, making it even harder to avoid attacks from the Deadites and Demons around you. You’ll quickly find yourself frantically running for your life, but like with all horror games, the thrill of the chase is arguably the best part.

Without this mechanic, which might seem like a superficial addition to the game at first, I fear Evil Dead The Game would be more hack-and-slash than horror. It helps to keep you on your toes and forces you to think much more strategically about how you use the limited items you have. Healing items and matchsticks are few and far between in this game; you don’t want to waste what little you have when you’re fighting against a Kandarian Demon.

However, when you are fighting against a Kandarian Demon, you get to experience a rewarding combat system that balances simplistic controls with epic finishing moves and desperate dodging. It might seem simple on paper, but it’s a pain to master – and that’s down to the detail in design. 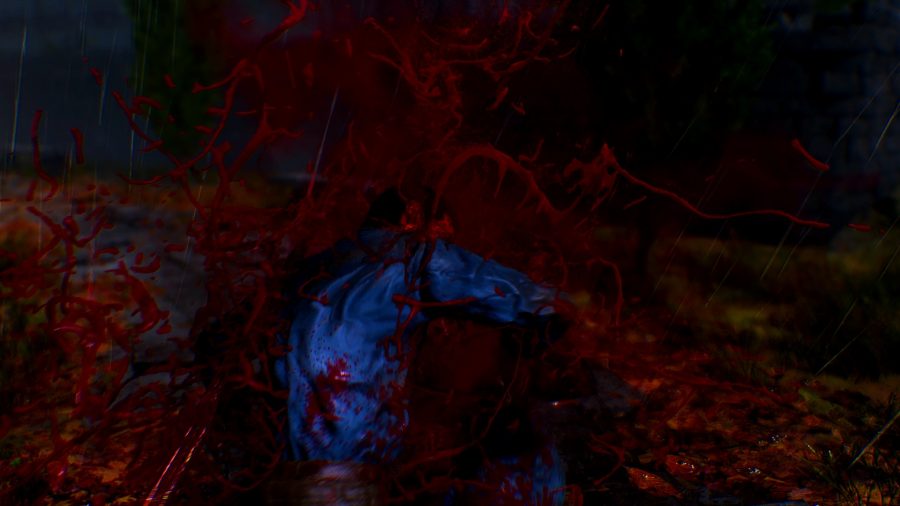 In Evil Dead The Game, every weapon has a damage number, a speed (whether that’s the reload speed for a ranged weapon, or swing speed for a melee weapon), and a range. You can pick up and use whichever weapon you like, but looking at the numbers and choosing the right weapon for your survivor will make you more effective in combat. For example, a survivor with a higher damage resistance is better suited to using a slower melee weapon with a higher damage stat – like a Sledgehammer – because they can afford to take the hit while swinging it.

To further deepen the experience, each weapon also has a dismemberment stat and a balance stagger stat. The dismemberment stat, as you might imagine, dictates how well a weapon is equipped to start lopping the limbs off of your enemies – which, in turn, weakens their attacks against you. The balance stagger stat details how effective your weapon is at knocking your enemies off-balance and depleting their balance bar – which is just below the health bar of each enemy. In a lot of cases, especially against tougher foes, this is much more important than dealing raw damage. When an enemy’s balance bar is depleted, they open themselves up for a hard-hitting finisher move – and more importantly, it stops them attacking you for a moment. It’s a combat system that rewards players for doing their research on both their survivor’s skill tree and weapon’s stats, but doesn’t stop casual players from jumping in to tackle the Deadites.

One thing that can get frustrating during combat, though, is the lack of a block feature. Dodging is the only real way to avoid damage during an onslaught of attacks at the moment, and this (just like the Fear system) forces you to think more strategically about engaging in combat and ultimately rewards teamwork and game management. Sometimes, it’s best to take a moment to loot for Shemp’s Cola before tackling the next objective – even if you’re at full health.

In addition to this, the driving mechanics in this game are a bit clunky. You don’t need to drive anywhere, which means this doesn’t really affect the gameplay, but it can make things a little frustrating if you get caught between a rock and a hard place. However, as long as you stick to the main roads and you’re paying attention, it gets you from A to B a lot quicker than you would do on foot, which, really, is the main reason why cars have been included.

While I have spent most of my time playing Evil Dead The Game as a survivor, I did dip my toes into the horrors of the Necronomicon to play as a demon a few times – and that’s a wholly different experience. 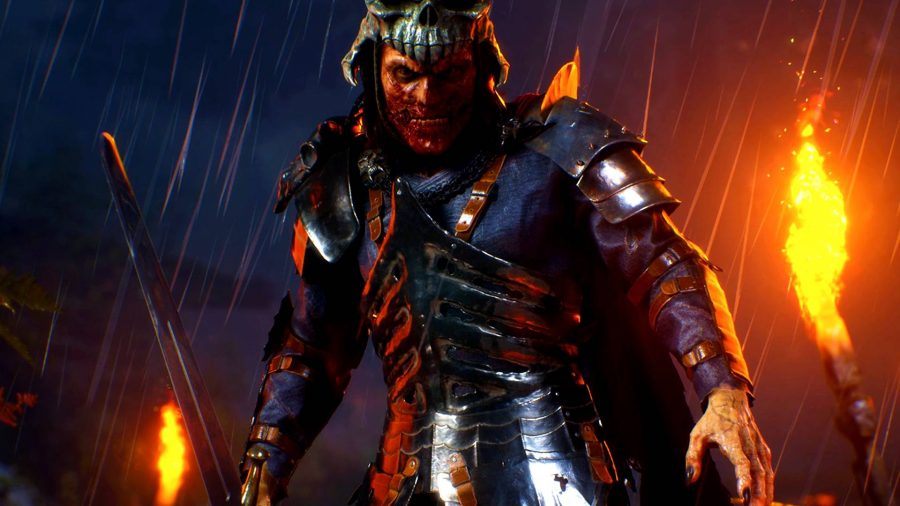 When you’re playing as a demon, you’re primarily orchestrating the Army of Darkness in Spirit Form. The erratic movement controls do take a bit of getting used to compared to controlling a survivor, but when you’re playing in this mode you really do feel like you’re in a Sam Raimi movie in the best possible way.

I will say that the lack of sensitivity options and accessibility options as a whole are troubling, and if you’re struggling to play, there aren’t any concessions available. This will make this side of things a steep learning curve for players who aren’t used to playing first-person perspective games and in this day and age, it really doesn’t make sense not to include these options from launch.

That being said, once you get your head around the controls, playing as a demon is much more rewarding than playing the baddies in other asymmetrical multiplayer games, like Dead By Daylight and Predator Hunting Grounds. Why? Because you’re not just playing as one Kandarian Demon; you’re playing as the whole Army of Darkness. 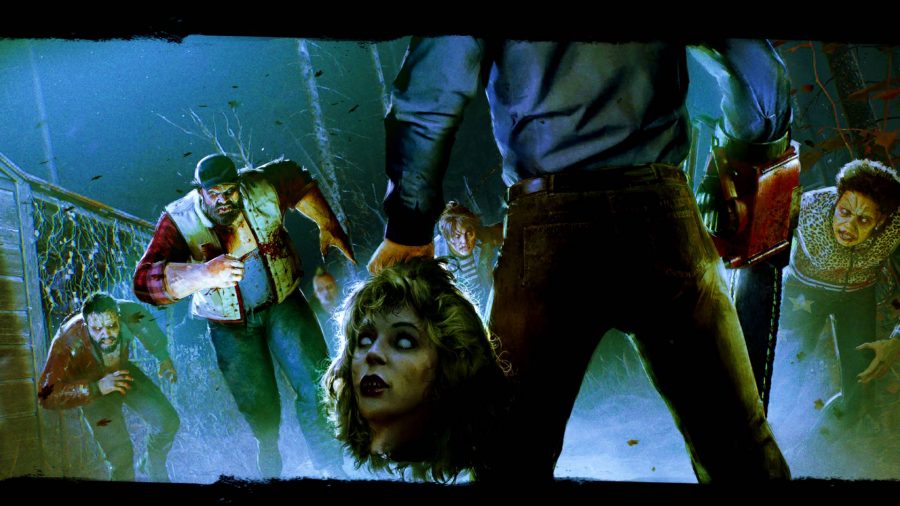 Using Infernal Energy, you can possess roaming Deadites and attack the survivors yourself, summon powerful elite enemies to further disrupt their attempts at banishing you, and even set traps in supply boxes and evil trees (something which always takes you by surprise as a survivor.) This gives you the satisfaction of the frantic hack-and-slash combat you get while playing as a survivor in addition to the deeper strategy that comes with being able to summon AI-controlled units and create obstacles for your opponents.

Then, with enough of this energy, you can summon a boss unit, which takes the form of whichever Kandarian Demon you’re playing as – be that Evil Ash, Henrietta, or Eligos. These boss units are by-far the most exciting way to play as a demon and, in the right hands, make short work of Ash Williams and his friends. It’s always satisfying to win a four-versus-one scenario, right?

In a similar fashion to the survivors, each demon boasts its own set of strengths and weaknesses, which players can work on improving with an equally deep skill tree. It’s clear that Saber Interactive has put as much thought into this side of the game as the other. The only issue I have at the moment is that there isn’t a mission that lets you play as the demon available at launch – however, with these missions tied to unlocking survivors, it’s not that surprising. There’s also no telling what Saber Interactive has in-store for the future, but I would expect at least one more demon to be released as post-launch content – Ash goes up against more than enough of them in the Evil Dead franchise. When you consider the depth of each skill tree, though, there’s more than enough content available for now.

So whether you’re playing with your friends against the forces of evil, or taking control of those forces of evil yourself, you’re in for a fun time with Evil Dead The Game. It’s action-packed, frightening when it needs to be, and full of charm. Of course, the gameplay loop could get repetitive – as with any asymmetrical multiplayer game – but I don’t see that happening for quite some time, especially if you split the time between hunting and surviving.