Soapbox features enable our individual writers and contributors to voice their opinions on hot topics and random stuff they’ve got on their minds. Kate would like to point out that two of the Ace Attorney games really should get a nice new remake some time soon…

The Ace Attorney games, in which you play as a lawyer who is kinda bad at his job but manages to win every case through charm, trial and error, and sometimes ghosts, are extremely popular. Sure, we’re not talking mid-2010s Call of Duty popular, but for a game series that’s largely about reading, 8.9 million sales worldwide is not bad at all…

…Which is why it’s so surprising that two of the games are about to be locked away in the inescapable prison of the Nintendo 3DS eShop when it closes down in March 2023. Phoenix Wright: Ace Attorney – Dual Destinies and Phoenix Wright: Ace Attorney – Spirit of Justice, the fifth and sixth mainline games in the series (sorry, Miles and Prof. Layton) were released in the West in 2013 and 2016 as digital-only, 3DS-only games. When the 3DS eShop closes, those games will be harder to access.

And yes yes yes yes yes, I know, Dual Destinies and Spirit of Justice are available on iOS and Android. Of course I know! I downloaded them both already, despite already owning them on 3DS, because I keep telling myself that if I keep investing in Phoenix Wright, one day we might get another new game. But it’s still a tragedy that these two games — which, by the way, are both really good — are digital-only, and soon to be mobile-only. They deserve so much better than that.

Unlike Spirit of Justice and Dual Destinies, Apollo Justice came out on the regular, non-3D DS, but it did receive a lightly polished-up re-release on the 3DS eShop (and iOS and Android). Physical copies are hard to get hold of, unless you want to spend twice the retail cost on eBay — which I’d say puts it in the same boat as Dual Destinies and Spirit of Justice, too.

A second trilogy would make sense, because the story of the first three is neatly wrapped up at the end of Trials and Tribulations, and a whole new plot arc begins in Apollo Justice and carries through onto Spirit of Justice, making them a great candidate for another stand-alone trilogy release.

[Warning: It’s going to get spoilery from here!]

Where the first trilogy dealt with Phoenix’s rise as a lawyer, the death of his mentor, the blossoming friendship with his mentor’s sister, Maya Fey, and the angsty sadboi feelings of everyone’s favourite prosecutor, Miles Edgeworth, the second trilogy deals with Phoenix’s fall, Apollo’s rise… and, eventually, his fall, too.

It is a much darker set of games than the first trilogy, even though the first trilogy had murder, kidnap, and a lot of familial infighting — but the second deals with events spread over many, many years, most of which are unavoidably interwoven with Apollo and Phoenix’s own lives, and Apollo’s tragic history.

In Apollo Justice, which is set seven years after the events of Trials and Tribulations (the third game in the series), Phoenix has been stripped of his badge, and now he has stubble. And a hat. Apollo is basically a baby, tasked with taking up the reins that Nick once held, and gradually becomes more confident as the game goes on.

Throughout Dual Destinies and Spirit of Justice, we see Phoenix restored to his former title, but we also see that he is a permanently changed and even damaged man because of it. Apollo, meanwhile, develops from an eager puppy of a lawyer to a grizzled veteran of the law, and we get to witness his entire family tree unravel before him.

(A quick aside: We’ve got basically zero information about Phoenix’s family or upbringing, except for the fact that he went to school with Larry Butz and Edgeworth. We don’t even know if he has siblings. Apollo’s family history, on the other hand, is so well-documented that I could probably tell you his blood type.)

The first trilogy remastered the DS games, with HD visuals replacing the original sprites, but a second trilogy would be more difficult. Apollo Justice: Ace Attorney is more or less done in a similar style to the previous two games, with flat sprites, which were upgraded to HD art with the 3DS eShop and mobile re-release — but Dual Destinies and Spirit of Justice are done with 3D animation. This would make any remastered visual style inconsistent across the three games, unless they massively upgrade Apollo Justice’s graphics, or downgrade Dual Destinies and Spirit of Justice.

But I am sure that Capcom could manage it, or at the very least, I could deal with the inconsistency. After all, the relatively-recent localisations of The Great Ace Attorney games were absolutely stunning on Switch, and packed with all sorts of fascinating extras, from the musical insights to the concept art. Maybe they’ve even set the bar too high, and that’s why it’s taking so long… if it’s in development at all. 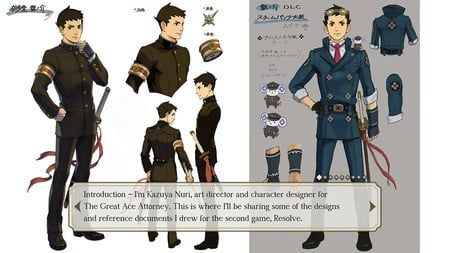 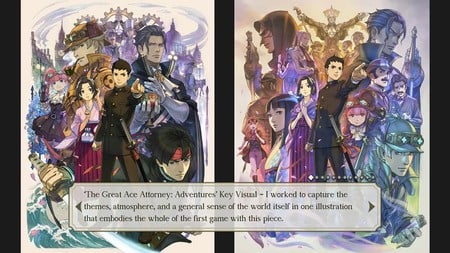 Some of GAA’s special features, plus pointing (Images: Capcom)

It’s been 6 years since Spirit of Justice came out — but the original Ace Attorney Trilogy didn’t come out until 2012, 8 years after the release of Trials and Tribulations. At the risk of sounding like a little whiny baby, I don’t want to wait another two years to see the next Ace Attorney remasters — and I really, really hope that they won’t be lost to the sands of time, or more precisely, Nintendo’s draconian refusal to archive or preserve games.

Let me know your thoughts on the mythical second Ace Attorney trilogy in the comments! But if anyone tells me that actually the Ace Attorney games are on iOS and Android like I didn’t mention that multiple times, I will point at you until you feel very silly.

Nihon Falcom May Be Bringing Retro Titles to Nintendo Switch