Sonic Frontiers is ambitious – that much has always been clear. The game’s initial gameplay reveal may not have painted the fruits of that ambition in the most polished light – technically, it was all a bit rough around the edges – but even still, I’ve been excited and curious about the potential this new concept has to redefine what a modern, 3D Sonic game could look like. I was very fortunate to have an opportunity to go hands-on with the game recently at a Summer Game Fest press event, and after spending almost an hour with it, I feel like I have a much more complete picture as to the potential this title has. Sonic Frontiers plays much, much better than it looks at the moment, and I fully expect that players will have a lot of fun exploring its intricately designed world once the full game is released.

I spent about an hour dashing, jumping, and battling my way through the sprawling, lush environment that was previously highlighted in Sonic Frontier’s trailers, and my main takeaway was that the game feels great to play at almost every level, even in this pre-release state. The zone I explored in my demo – the green, hilly ecosystem that has been previously highlighted in trailers – is an absolute joy to explore, being both vast and dense with compelling things to do. From tucked-away platforming challenges that can lead to hidden collectibles, to giant, intimidating bosses that freely roam the environment, there’s a surprisingly large amount to see and do in this first area. Better yet, what I saw of the game’s content had me feeling hopeful that this could be the smartest 3D Sonic title in a while, one that rewards player curiosity more than any other previous entry. 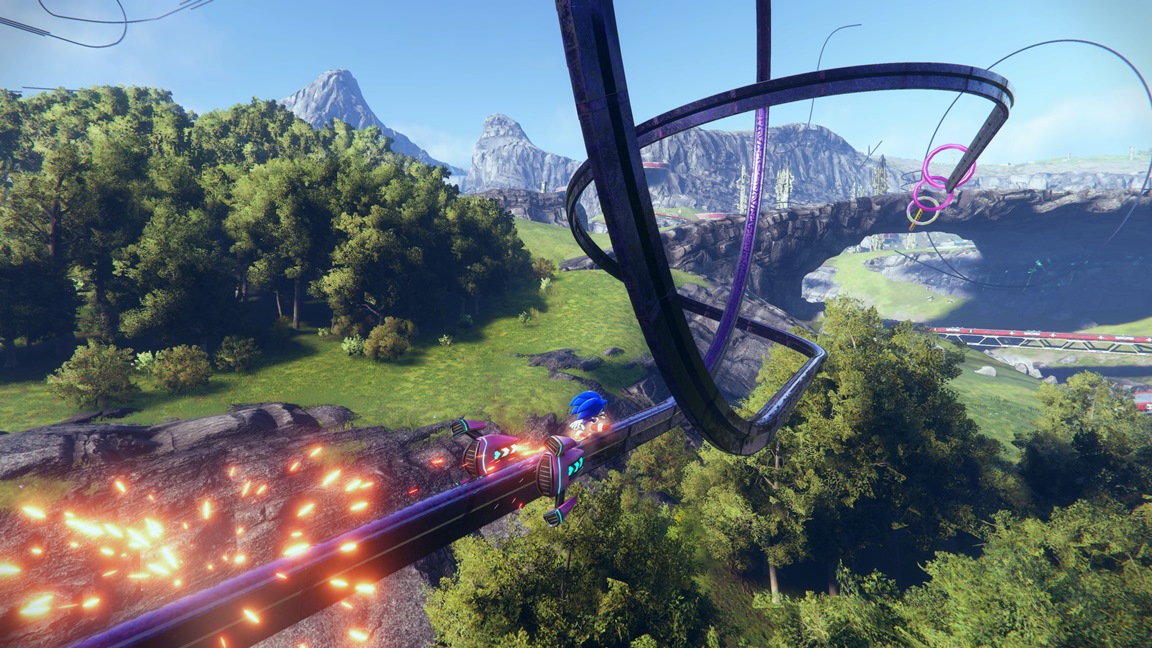 Sonic Frontiers has two different playstyles to choose from: Action Style, which gives Sonic a bit of extra weight as he moves around, and High-Speed Style, which is considerably faster. Rest assured that if Sonic’s speed looked a bit slow in previous gameplay trailers, it feels much better when you’re actually playing it. Action Style is being billed as an experience recommended for more casual players, and High-Speed Style is described in the game as recommended for people who are used to Sonic games. While the game definitely feels better to play at a faster speed – it’s just more exhilarating and challenging – Action Style did a great job at helping me get accustomed to how Sonic moves in this new open environment, and was a great introduction to the physicality of his combat style.

Controlling Sonic felt natural, and his movement style combined with the many, many grind rails and boosts located around the environment allows for what felt like a lot of room for creative traversal of the world. In fact, what I played of Sonic Frontiers was all remarkably freeform. While you are following a story with an ultimately set throughline, how quickly you get to the next part of the game and what you do along the way is almost entirely up to you. Your progress in Sonic Frontiers seems to be primarily gated by portals, which can only be activated after you complete a certain number of activities around the map – but what activities you decide to do and the order in which you do them seems mostly up to you. Want to go explore that massive tower in the distance? Hey, if you can find a way to the top, go for it. Want to focus on locating the small environmental puzzles that are scattered about, or participate in some timing-based challenges? You can do that too. Want to go challenge one of the many large bosses that are stomping – and sometimes flying – around the environment? The game won’t stop you. There’s even fishing, apparently. Don’t ask me how that works – your guess is as good as mine at this point! 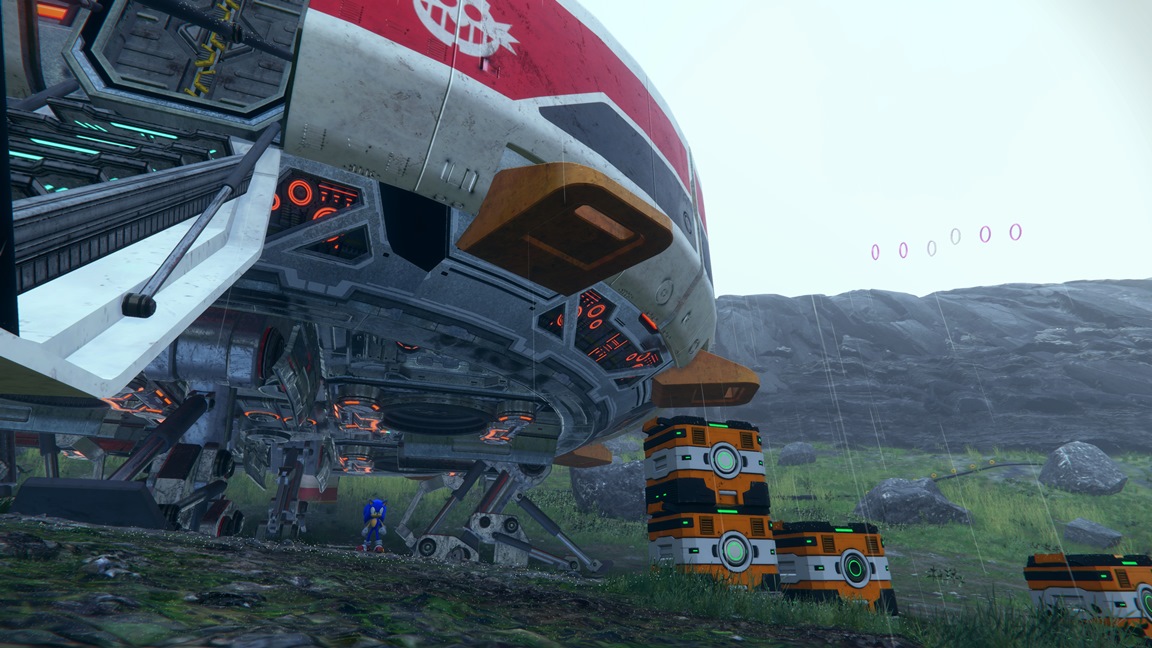 Sure, nothing is keeping you from racing through the game as fast as possible, but if you want to collect as many rings as you can, or just generally look cool while dashing around, you’ll really want to take some time and explore alternate routes. Now, look – it is weird that there are grind rails just floating around the game world, tethered to nothing, and there were a few that I rode on that didn’t really seem to go anywhere. But most of them did, and those ones often led to something interesting. And while I didn’t receive any specific details, the SEGA rep I spoke to at the event said that there are multiple other “biomes” in the game beyond the green and hilly zone we’ve seen so far – although what those other regions will look like is anyone’s guess.

Don’t expect combat to be the mindless breeze that it has the reputation for being in other 3D Sonic games, either. Very few of the enemies you’ll encounter are mindless foes – most of them are either very aggressive, very resilient, or very large. Each encounter feels important, and each type of enemy I faced in this first area felt distinct. One of them, for example, was invulnerable unless I managed to use my Cyloop ability to draw a trail around it, at which point it would be stunned long enough for me to get in a few attacks. Another one required me to use Sonic’s homing feature to chip away at armor piece by piece, and my favorite encounter – a massive, lumbering creature that vaguely reminded me of Horizon Zero Dawn’s Tallnecks – required me to actually run up the side of the boss, then get above its shield to perform some midair attacks on its weak points. 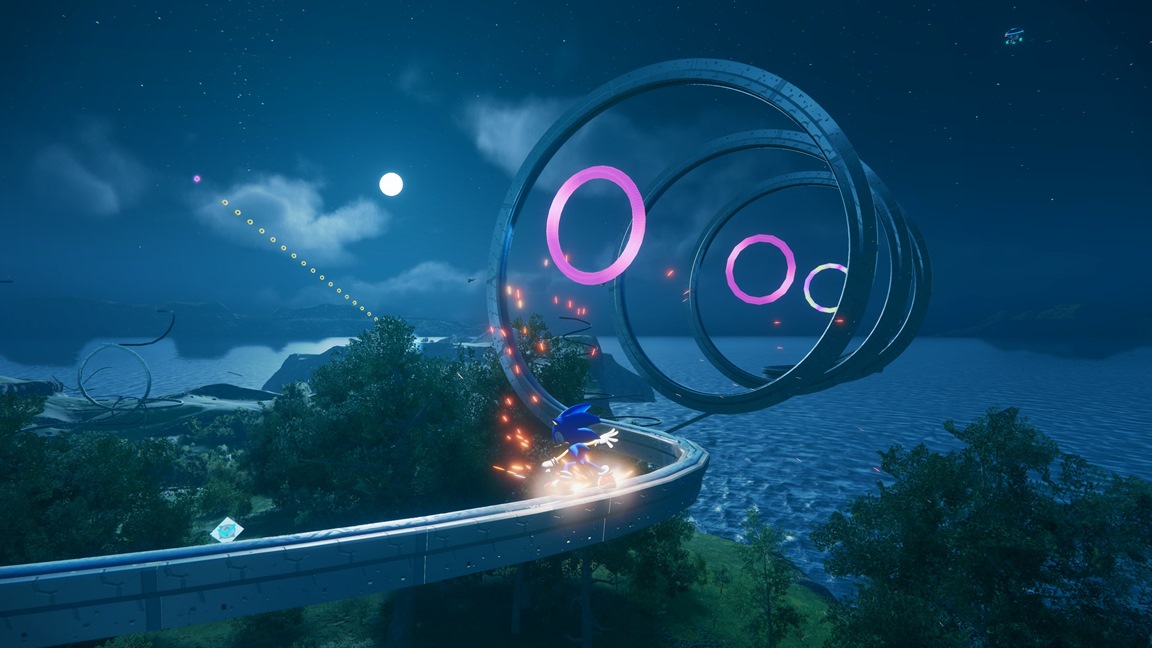 You can also parry attacks and perform ground stomps, so Sonic’s repertoire of skills is already comprehensive, even at this early stage. And, in classic Sonic fashion, if you lose all your rings – which can happen in only a few hits if you’re careless – the character will meet his demise. Fortunately, any damage you’ve dealt to a boss before you die seems to persist when you return to them, so the penalty for messing up isn’t too harsh, but it’s all just challenging enough that I felt an engaging amount of pressure to maintain awareness as to what my foes were doing.

Also, it sounds like this version of Sonic will get upgraded over time if you choose to. Collect enough Skill Pieces around the environment, and these will eventually merge into Skill Points that can be used to unlock new abilities, and somehow make him even faster If you want. I don’t know for sure what the full scope of this system is, but it seems promising at this early stage, and I’m curious to see how vastly the Frontiers experience may or may not change depending on how I choose to upgrade my version of Sonic.

One thing I didn’t get to see too much of in this demo was the story, although from what I did see – don’t expect some big emotional magnum opus. While Sonic doesn’t really seem to talk too much during gameplay, the few cutscenes I saw contained the same old charming goofiness that all Sonic players are deeply familiar with at this point. It’s a little incongruous with the pensive piano notes that soundtracked my exploration, but the focus of Frontiers seems very much to be on the gameplay – which I’m really relieved about. 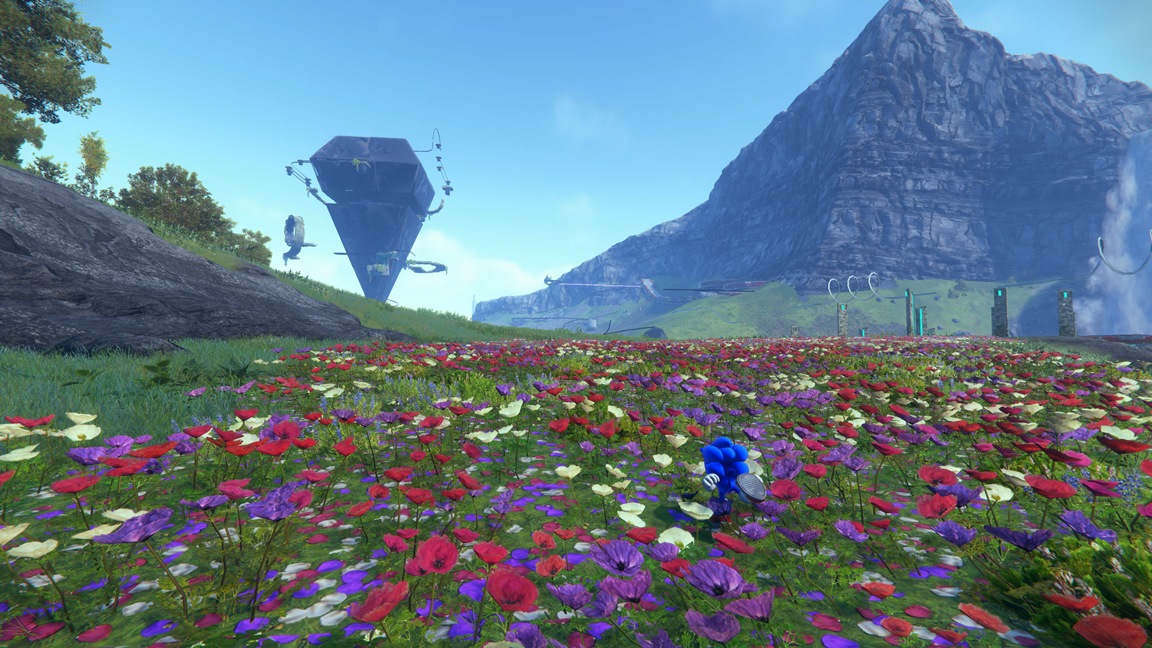 The big unknown for me, really, is if Sonic Team will get this game to a technical state that’s solid enough for a release later this year. What I played was very much an early, pre-release build, so it’s not necessarily a metric of how the final game will turn out, and what I experienced was technically solid overall. There are just a lot of rough edges at the moment, from egregious pop-in and bland textures and lighting to a subpar resolution – and I wasn’t even playing the Switch version. Still, there’s plenty of time between now and the end of the year, so there’s no reason the game needs to launch in rough shape – and mechanically, everything is fun to play as is, a statement that is truly a joy to write out.

I left my demo of Sonic Frontiers overall very impressed with what I played, and I’m very much looking forward to playing more – I get the sense that the surface has only barely been scratched as to the scope of this game. Sonic Frontiers is currently scheduled to launch this holiday on Switch and other platforms.

You can check out the video version of our preview below, which includes new gameplay.

Disclosure: Screenshots and access to a pre-release build of this game were provided by the publisher for the purposes of this preview.

'The Cycle: Frontier' review: not exactly vicious, but close - NME 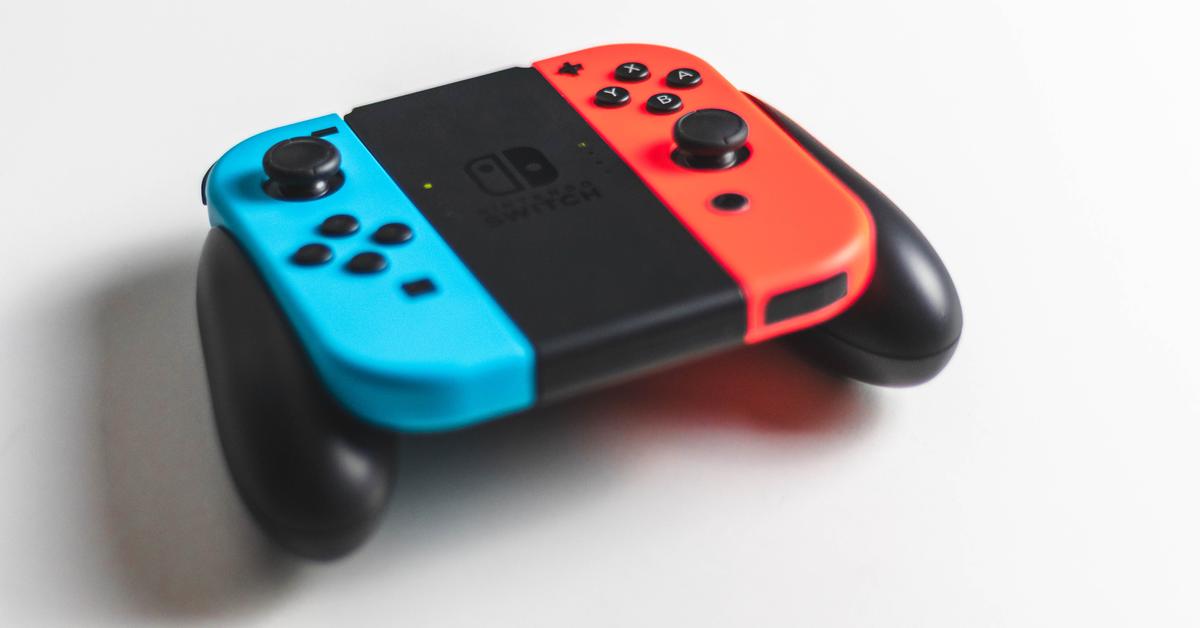 How one can Join a Nintendo Change Controller to an iPad 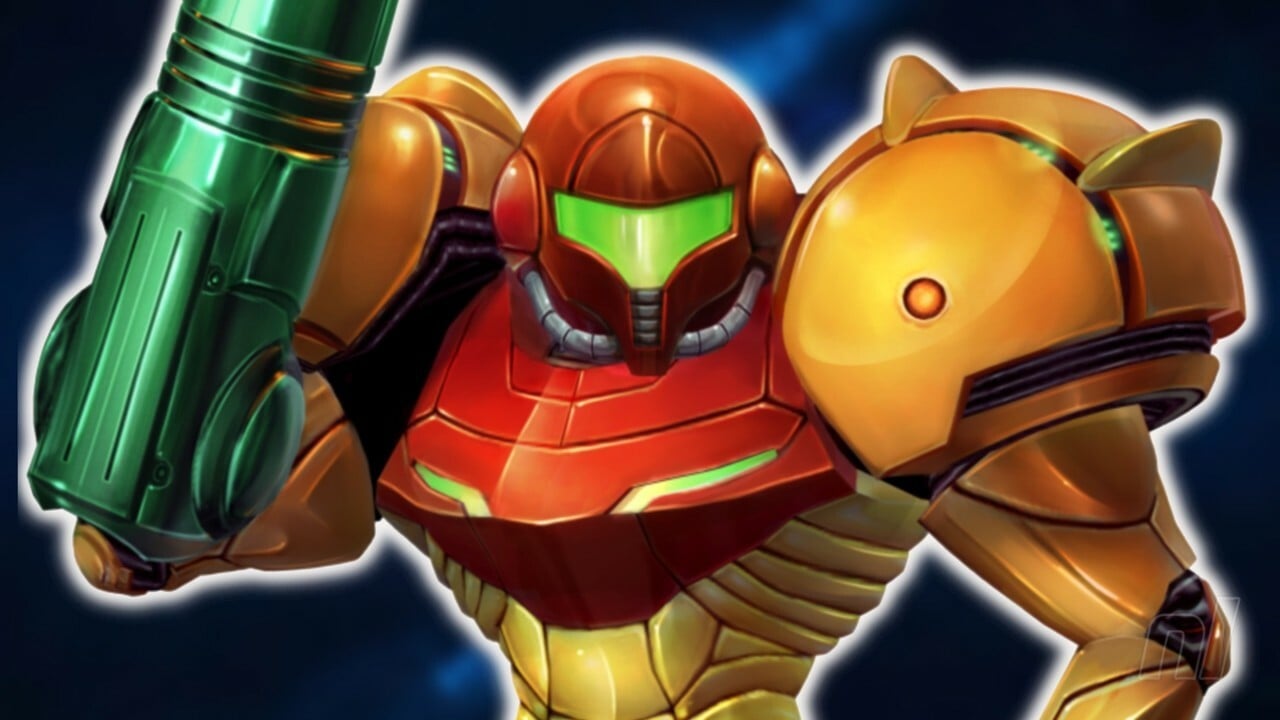 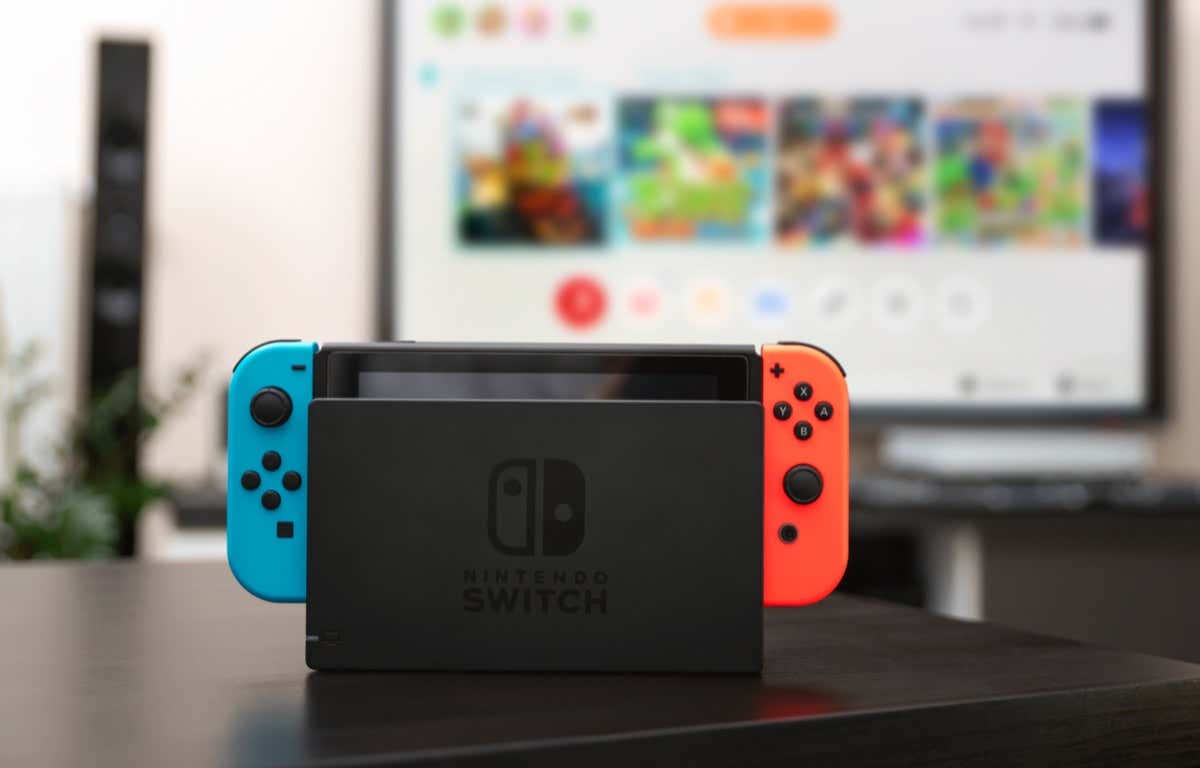 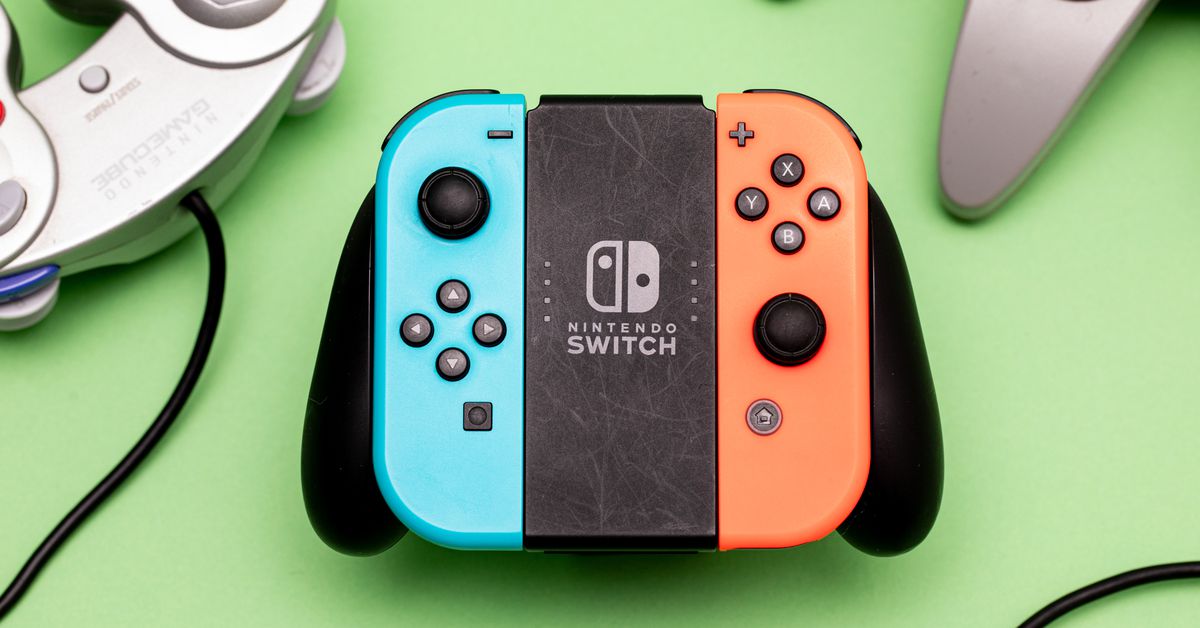