When it comes to video game characters, they don’t come much more iconic than Pac-Man. The little yellow circle first wakka wakka-ed into arcades in 1980, and people have been hooked on chomping dots ever since. Even today, the opportunity to sit down for ten minutes and play a game of Pac-Man really appeals to me. It’s just timeless. To celebrate 42 years of the Namco mascot, it’s time to pop some pills in Pac-Man Museum +.

Pac-Man Museum + features 14 different games to play, ranging from absolute classics to absolutely weird. Before you jump into any of the classics though, you’ll be greeted by our hungry hero standing in the middle of an arcade. In this hub area you’ll see all the different cabinets of the games you want to play, as well as Pac-themed decorations and a gachapon machine (more on that later).

I imagine most people will start with a classic game of Pac-Man, which is as delightful as ever. The ghost dodging gameplay of this 42 year old game just never ceases to bring a smile across my face, and although it’s been re-released hundreds of times at this point it still has value.

Alongside the original game, Pac-Man Museum also features a handful of similar updated versions of Pac-Man – with different graphics, power ups and levels to munch your way through. Pac-Mania is a weird zoomed in 3d version of the game with jumping, and the two Pac-Man Arrangement games have all sorts of weird and wonderful stages with boost pads, conveyor belts and different floors to play around with. None of them are quite as iconic as the original, but there’s some fun to be had trying them out. 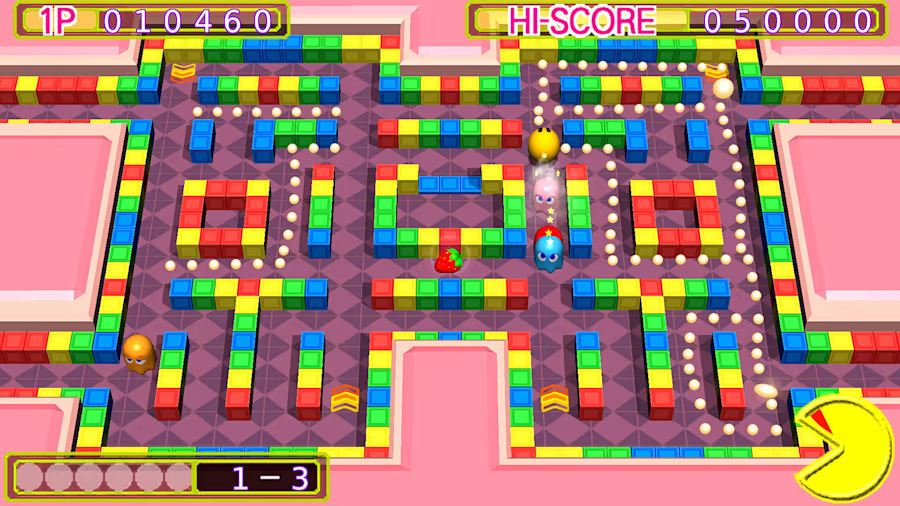 Sticking with the older titles, Super Pac-Man and Pac & Pal are bizarre twists on the classic formula. Super Pac-Man sees you collecting fruit in a fairly standard Pac-Man maze that’s full of locked doors, which require you to collect keys to open them. As if this wasn’t confusing enough, Pac & Pal is an almost incomprehensible game involving flipping cards and a green ghost ally. It’s unlikely either of these games will be anyone’s favourite, but no judgement to all you Pac & Pal enthusiasts.

If you’re feeling more in the mood for a 2d platformer, Pac-Man Museum has got you covered too. Pac-Land might not be what you’re looking for though, it’s a side scrolling platformer that was made a year before the original Super Mario Bros- and it shows. Pac-In-Time is much more entertaining, and tasks you to gather all the dots in a stage with multiple power ups to use. The best of these is essentially the Ninja Rope from Worms, and is a fantastic way to launch yourself around a stage.

Before we get to the very best games in the collection, there are a few odd inclusions to talk about. Pac-Motos places our yellow hero in an arena and tasks you with shoving all the enemies off the edge, kind of like a full game of Mario Party’s Bumper Balls. Pac ‘n Roll Remix is a remake of a DS ball rolling game, where Pac-Man is the ball. It’s a fun little inclusion, but loses some of the DS stylus swiping magic. If you’re looking for something to do with your friends, Pac-Man Battle Royale is a great option. It’s essentially regular Pac-Man, but the goal is to survive long enough to chow down on a power pellet and eat your friends who turn blue alongside the ghosts. 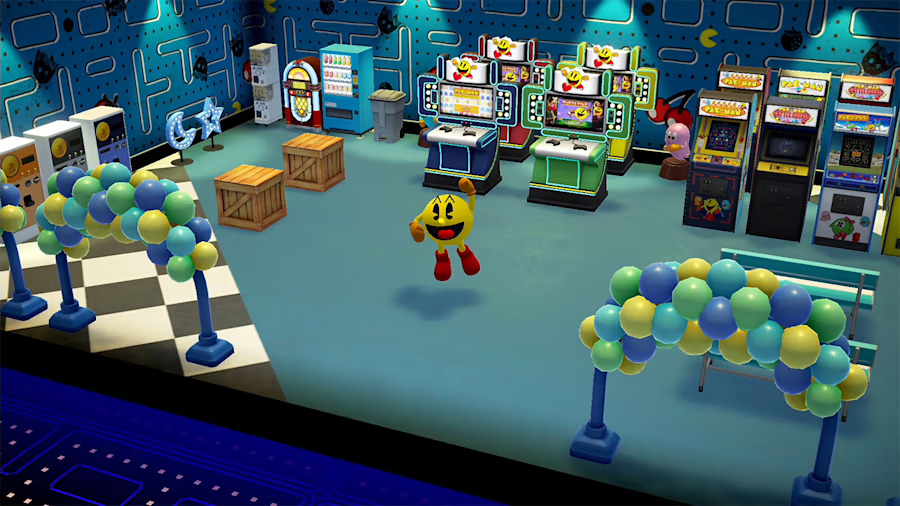 There are three standout games in Pac-Man Museum +, which I put more than a few credits into. Pac-Attack is one of my favourite puzzle games of all time, with the fantastic concept of combining falling blocks with Pac-Man and his ghostly enemies. By rotating and arranging the blocks to create a path of ghosts for Pac-Man to gobble, you can clear the board and survive for longer. There’s also a puzzle mode that requires you to don your thinking cap to clear all the ghosts with a limited number of Pacs. Versus mode is available too, which brings back many traumatic memories of being thoroughly thrashed by my mother.

Pac-Man Championship Edition is just as awesome now as it was on Xbox Live Arcade back in 2007, bringing high octane arcade action and all the score chasing you could ever want. The neon aesthetic is as stylish as ever, and there are a whole bunch of modes to explore and chase the leaderboards on. It’s a bit of a shame that the sequels DX and Championship Edition 2 aren’t available in Pac-Man Museum +, because they were just as enjoyable.

Last but not least, we have the fantastic Pac-Man 256. This Pac-Man style endless runner is incredibly compelling, with unlockable power ups, objectives to complete while escaping the ever encroaching glitch, and a ton of snazzy skins for your visual pleasure. If you’ve somehow managed to miss out on this cracking game on mobile and console, it’s a great addition to the package. 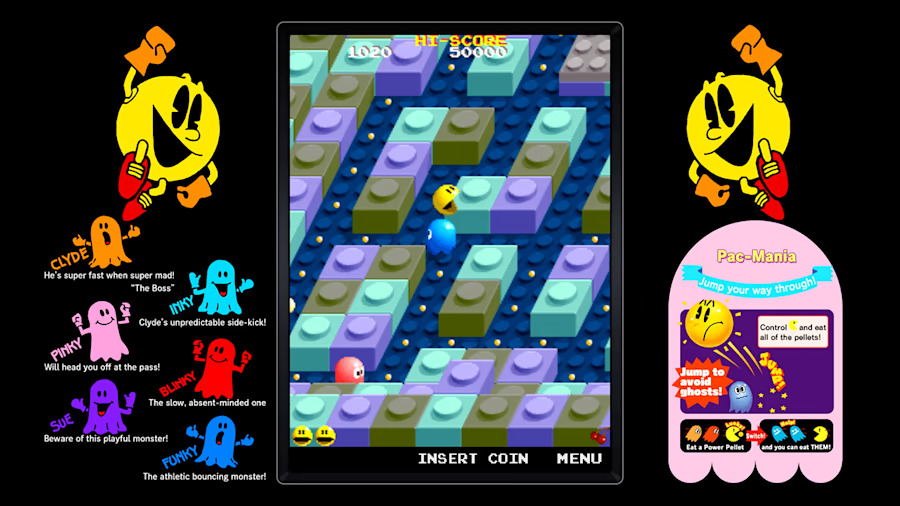 Outside of the games themselves, Pac-Man Museum + has a few extra aspects to enjoy. The most important of these are missions, which are little goals to accomplish in each of the 14 games. This might involve getting a high score in a certain game, or eating a certain amount of ghosts in a single run. None of these objectives are particularly revolutionary, but they give you something to aim for as well as a handful of precious coins.

By playing well at the games you’ll be given some dosh, which can be spent on decorations for your own personal arcade. The more Pac-Man Museum + you play, the more wallpaper, background music and familiar visitors you’ll have to your gamers paradise. If you’re feeling lucky you can even spend some money in the gachapon, and unlock statues of all your favourite characters in the Pac-Man universe. You don’t need to bother with the arcade if you’d rather be playing the games, but it’s a fun little distraction that made me really want an arcade themed Tycoon game.

Pac-Man Museum + is undoubtedly full of great games, but it really doesn’t add a whole lot more than older compilations already feature. The lack of the later Championship Edition games is very noticeable, and some of the more substantial games like the Pac-Man 3d platformers or kart racers wouldn’t have gone amiss either. Nevertheless if you’re an arcade fiend and want to play some Pac on the go, Pac-Man Museum + will bring you hours of score chasing joy.

Liked it? Take a second to support GodisaGeek.com on Patreon!

Star Wars Games That Should Be Ported To Switch