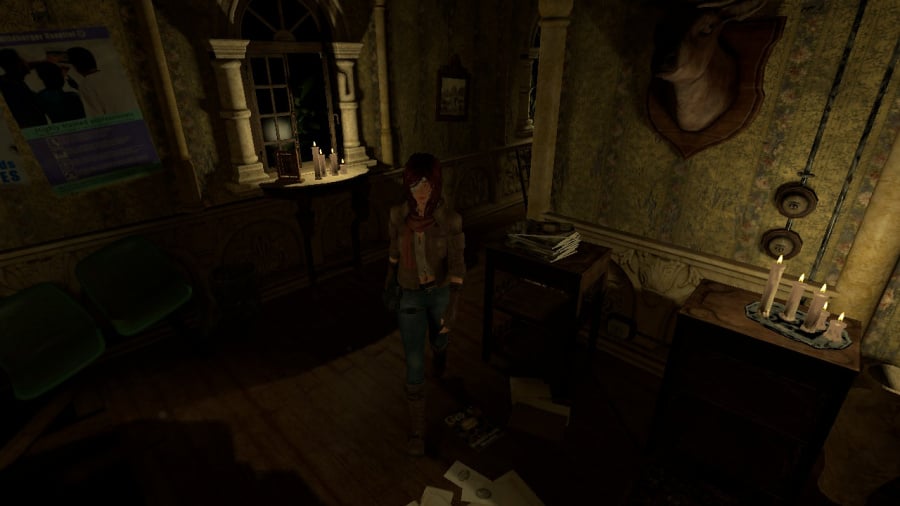 “This game contains scenes of explicit violence and gore.”

It’s a phrase so familiar to fans of classic survival horror games that its appearance at the start of Tormented Souls almost feels comforting. Since the mid ’00s, the genre has been bent and twisted to keep up with the changing times and the growing fatigue around overused mechanics in franchises like Resident Evil and Alone in the Dark. The classic survival horror tropes of the ’90s — fixed camera angles, stationary aiming, and careful item management — have become all but extinct. Tormented Souls is a love letter to the classic horror games of the ’90s; a true homage that embraces the genre’s origins. It’s a shame, then, that it largely struggles to measure up to such a high benchmark.

The game starts off on a bit of a sour note with an opening sequence that’s both blurry and jittery; it’s almost a callback in itself to N64-era cutscenes, but it’s clear that the presentation is simply a byproduct of the game’s port on Switch, as such performance issues aren’t noticeable on other consoles. Once you get into the gameplay itself, however, the presentation fares much better. You awaken in a small x-ray room as protagonist Caroline Walker and immediately the fixed camera angles signify that this is old-school survival horror through and through. Soon after, you pick up a lighter that can be used to illuminate the dark surroundings, and the shadows that dance across the rooms as you walk through them is a genuinely impressive sight to behold.

As you explore, you’ll encounter puzzles and enemies that will make die-hard survival horror fans grin from ear to ear. Enemies will often lie in wait, just out of sight of whatever camera happens to be fixed on Caroline; it’s a strong way of ramping up tension in certain scenarios, but in others, the lack of visual cues is downright frustrating, particularly when the odd positioning of the camera causes you to lose your sense of direction. Similarly, aiming with your weapons is very much ‘classic’ survival horror; you can aim in any direction, but moving your feet at the same time is unfortunately an impossibility for Caroline; you’re fixed in place. Thankfully, there’s a dodge mechanic that can get you out of tight spots, but since you can only dodge backwards, it’s useless if you’re backed up against a corner.

Puzzles will also look familiar, but their implementation feels a bit more involved than other survival horror games. Tackling them requires very much the same process: you’ll need to explore your surroundings, gather items, and combine them together to unlock new paths and obtain key items. The inventory screen implements the use of an on-screen cursor, which can be used to select items and move them directly into the in-game world. You can also examine items and select specific parts of them to interact with directly. The on-screen cursor makes the process feel pleasantly intuitive, and you’ll be able to see the effects of your item usage in real-time.

Ultimately, although Tormented Souls is a commendable homage to classic survival horror games, its focus on the past is unfortunately its biggest downfall. Advertisements for the game bill it as a “modernisation” of the genre, but the mechanics within feel as archaic as the games it’s emulating. At around seven hours or so in length, you’ll have a decent time here if you’re a die-hard fan of horror games that wishes some of the big names would revisit their origins, but for everyone else, the fixed camera angles and limited combat may prove more frustrating than nostalgic. Add to that some technical hiccups in the way of dodgy cutscenes and animations, and you’ve got a game that very much plays second fiddle to the more established survival horror games on Switch.

All About Tremendous Nintendo World at Common Studios Hollywood … – PEOPLE